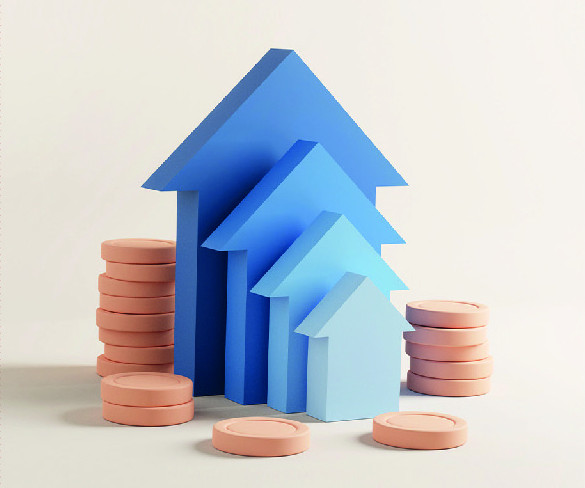 An Overview of the Iraqi Banking Sector and Financial Infrastructure

Following the conclusion of the Iraq War, the Banking Law was enacted on September 19, 2003. The law conforms Iraq's banking regulatory structure to international standards and strives to foster confidence in the banking system by forming a safe, sound, competitive, and accessible banking sector. The Central Bank of Iraq Law, enacted on March 6, 2004, established the Central Bank of Iraq (CBI) in its current form as Iraq's autonomous Central Bank. Currently, Iraq's economy remains primarily cash-based. According to the World Bank, only 23% of adults in Iraq own a bank account, a figure that lags behind neighboring economies.

The country has a total of 74 banking institutions. However, they have contributed to only 1.94% of the national GDP in 2021. These banks have 904 branches spread out across the country, yet, the bulk of those branches are concentrated in the economic centers of Baghdad and Basra, with 37.1% and 9.3%, respectively. Furthermore, according to the World Bank, the number of commercial bank branches per 100,000 adults was 5.63 in 2020, a figure that is significantly smaller compared to figures from neighboring countries; for example, this number equates to 16.1 in Turkey, 31.1 in Iran, and 13.6 in Kuwait. 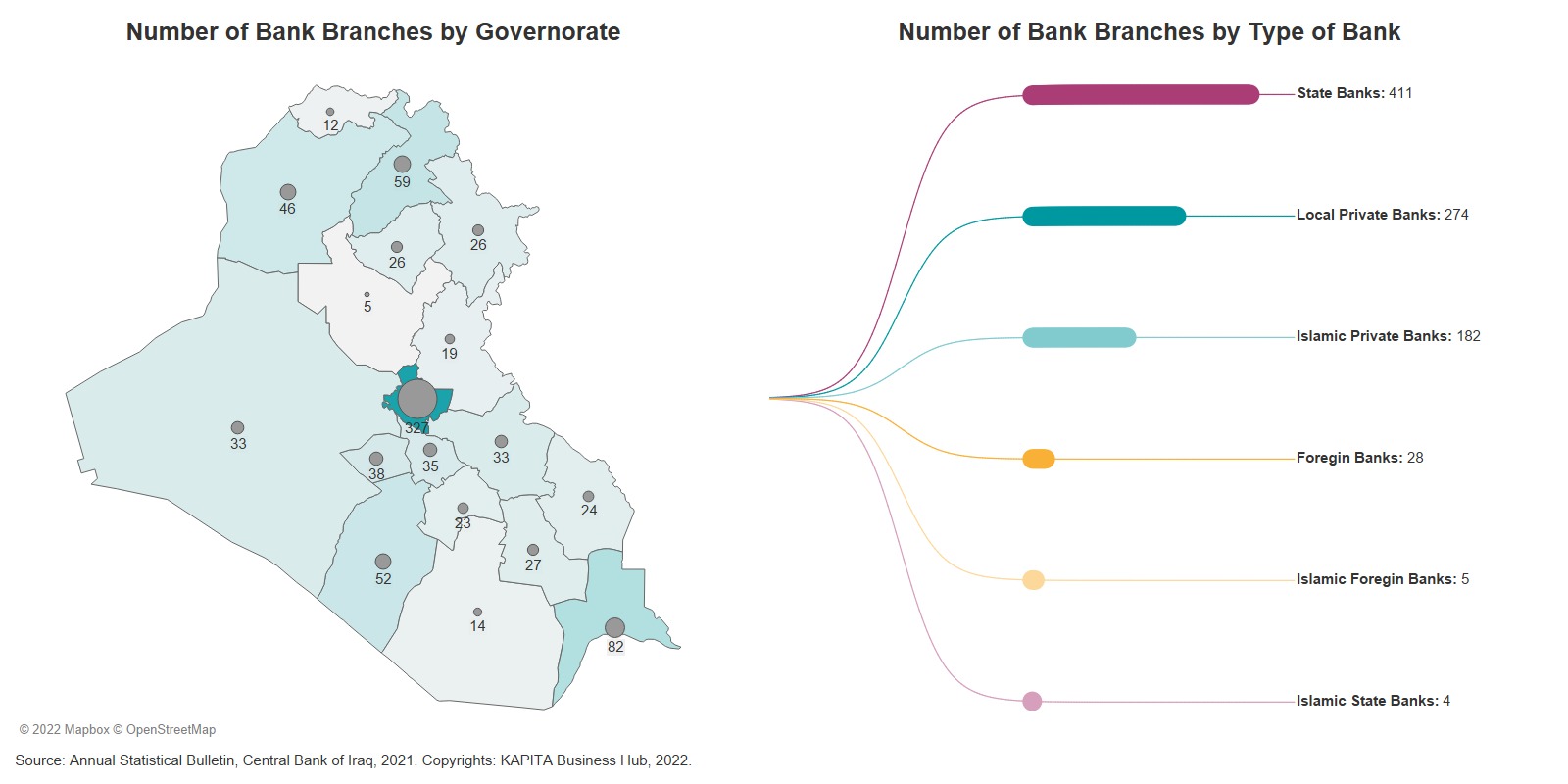 The Iraqi public budget for 2021 was approved on the 8th of April of the same year. The budget exhibits 129 trillion IQD (88 billion USD) in expenses and a record deficit of 28 trillion IQD (19 billion USD). 87.3% of the proposed budget income is derived from oil revenues.

When reviewing the 2021 public budget's expenditures, certain numbers stand out. First, the Council of Ministers received the largest allocation among the major governmental institutions, accounting for 6.334% of the entire budget (35,220 billion IQD).

Second, the public budget allocations appear to be unbalanced across the Iraqi ministries. For example, the Ministry of Finance and the Ministry of Interior receive significantly higher allocations compared to the remainder, with a designated 28.71% and 13.52% of the total budget, respectively. Meanwhile, the ministries that are indispensable to the people's vitality and quality of life appear to be neglected; the Ministries of Agriculture, Transportation, and Water Resources were allocated 0.16%, 0.21%, and 0.37% of the total budget, respectively, all of which are sectors in dire need of attention from the government.

With regard to governorates, Baghdad received the largest share of spending, reaching 19,258 billion IQD (3.463% of the total budget). It is unfortunate to witness that the governorates that have suffered the most as a result of the conflict and violence caused by the Islamic State have not been given enough consideration; Nineveh and Sala Al-Din, the governorates that incurred the most damage, received only 0.275% and 0.155%, respectively, of the total budget, the least amount amongst all others. 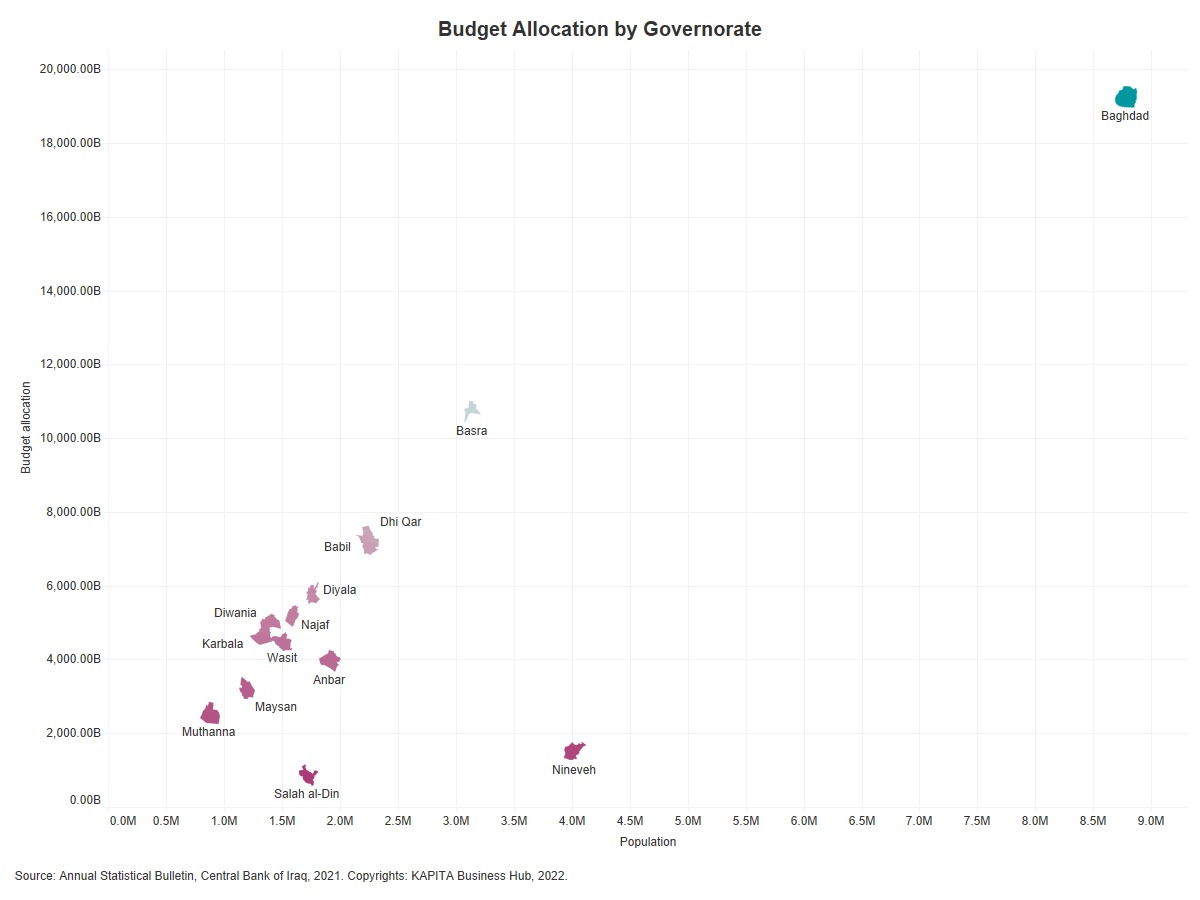 State-Owned Banks (SOBs) are the banks under the governance of the Iraqi Ministry of Finance and the CBI. SOBs have the public sector as holders of their deposits and extenders of credit. Furthermore, they also deal with the private sector's loans and deposits. SOBs own 78.6% of the banking sector's assets, control 84% of cash credit extended, and have 87% of the total deposits. This could be because of their extensive branch network throughout the country (as they currently constitute 45.5% of total bank branches in the country) and the fact that they are government-guaranteed. However, they constitute only 9% of the total number of banks in the country.

The majority of banks in Iraq are privately owned, accounting for 90.5% (67 out of 74 banks) of the total number of banks. Private Sector-Owned Banks (PSOBs) make up the vast majority of the banking sector's capital, accounting for 75.4%, due to their larger number and adherence to the Central Bank's directive of having a minimum capital of 250 billion IQD. However, as previously stated, these banks are heavily overshadowed by SOBs, accounting for only 13% of total deposits, 16% of extended cash credit, and 21.4% of the banking sector’s assets.

Electronic Banking and Payment in Iraq

Following 2003, the CBI set out to revitalize Iraq's banking sector to keep up with global banking trends. The CBI implemented the Cash Automated Clearing House and Real-Time Gross Settlement System in 2006. In 2014, retail payment regulations were introduced, and the CBI implemented the Iraq Retail Payment System Infrastructure in 2016. The CBI authorized mobile wallets like ZainCash and AsiaHawala in 2016, which proved useful during COVID-19 as they were the vehicle for government grants, as well as boosting online shopping and e-commerce platforms.

The number of issued electronic cards has grown since 2017. Prepaid cards, in particular, have grown exponentially in popularity, with over 9.7 million cards issued by the end of 2021. This seeming preference is due to the ease of their use and the simplicity with which they can be obtained without the requirement to create a bank account. 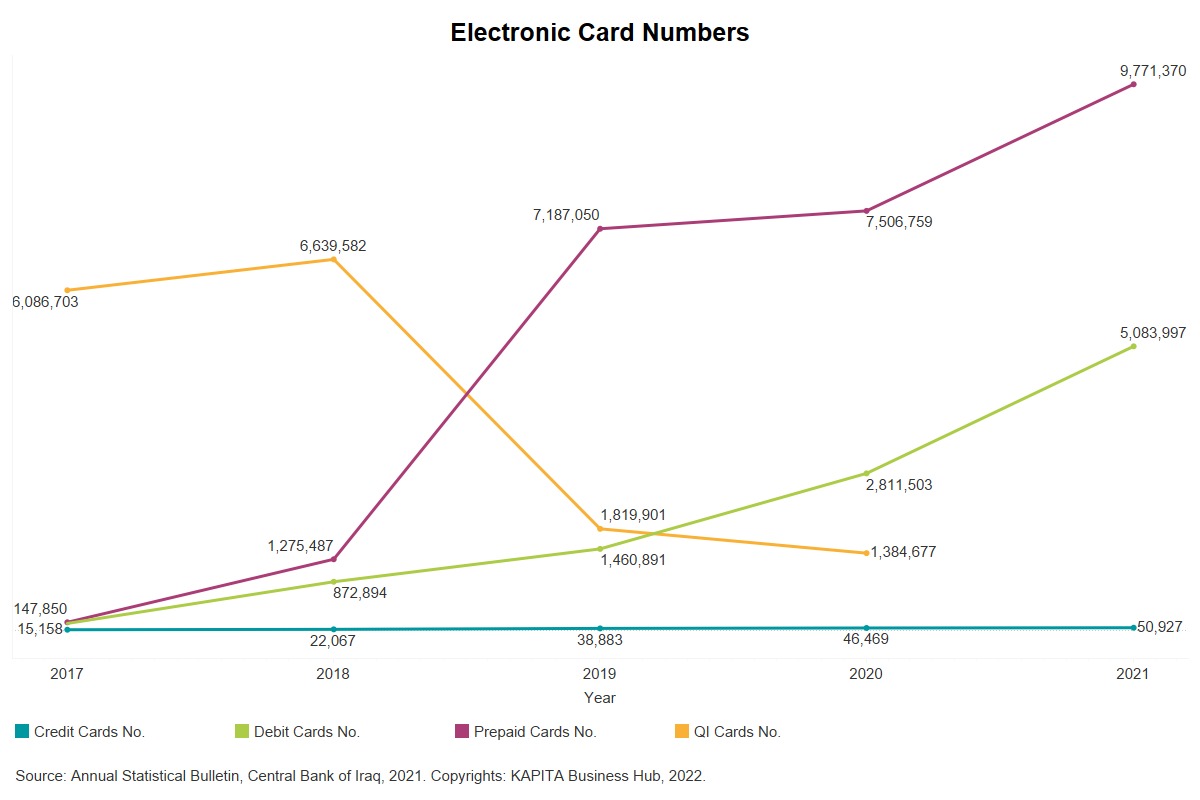 Yet, banking solutions are lagging behind the ever-growing quantity of electronic cards. ATMs and POS terminals are not expanding at a rate that facilitates the convenience associated with electronic payment options. Rather than that, it creates an imbalance and necessitates the cardholder to withdraw cash to enable daily transactions. 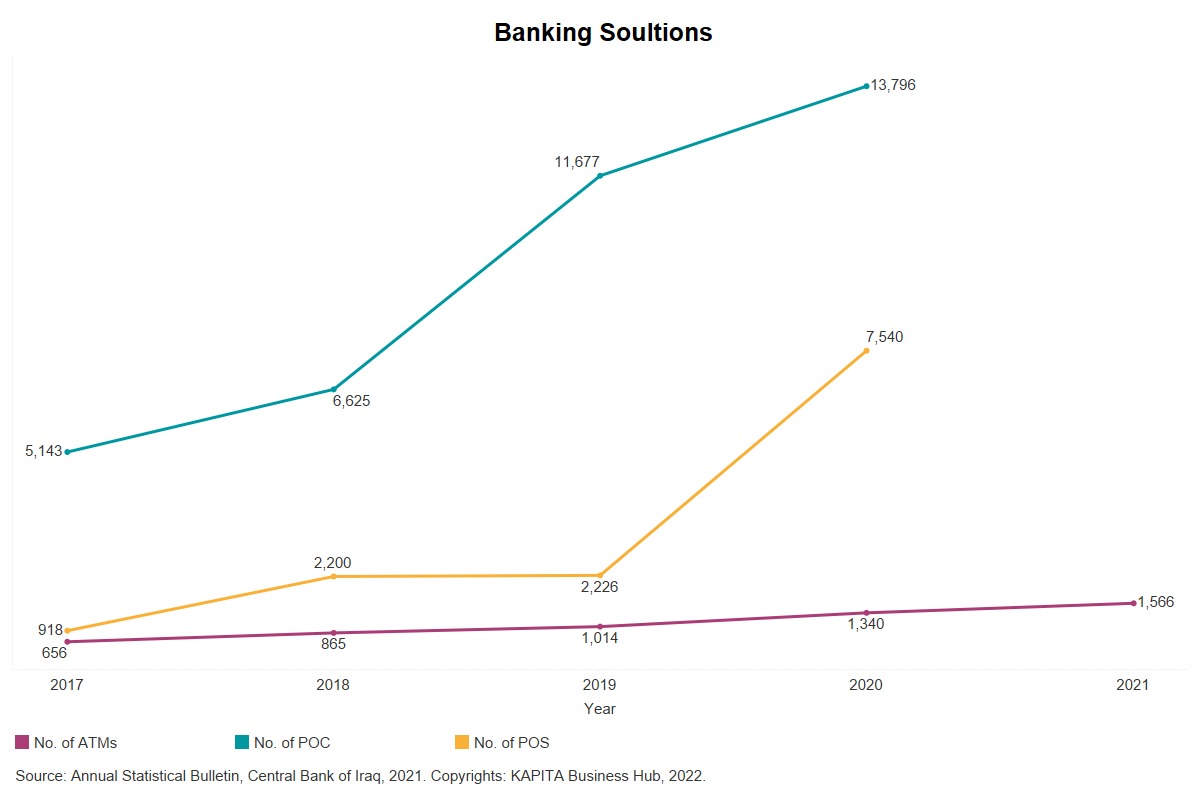 AsiaHawala is a multifaceted payment service provider that was established by Asiacell Telecommunications toward the end of 2015. It offers several services, including money transfers, transactions, bill payments, salary disbursement, and online shopping payments. It features a variety of wallets to meet the needs of its various customers. AsiaHawala has had over 527.9 thousand transactions valued at 164.8 billion IQD in 2021.

ZainCash is Iraq's leading mobile payment operator, founded in 2015, with over 3 million transactions valued at 719 billion IQD in 2021. The wallet allows the user to link their bank accounts and attach Visa and Master cards for easier top-ups. ZainCash also provides the option of issuing a wallet MasterCard and a virtual reloadable Visa Card. It also supports money transfers, mobile phone recharges, and payment of government bills. Recently, ZainCash has added the option of using QR codes to pay merchants and cash out from agents, as well as their new virtual renewable Visa card that can be obtained through their application. 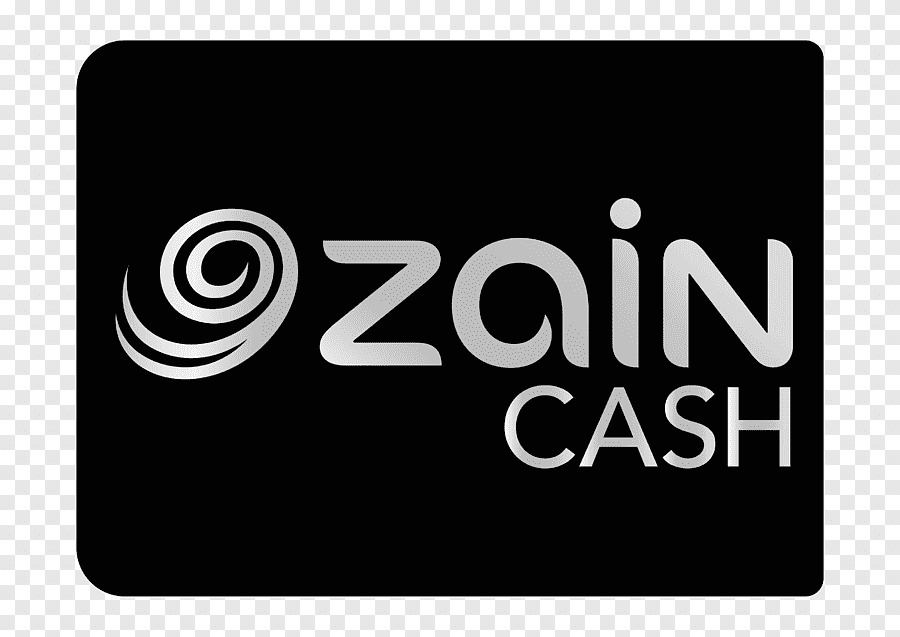 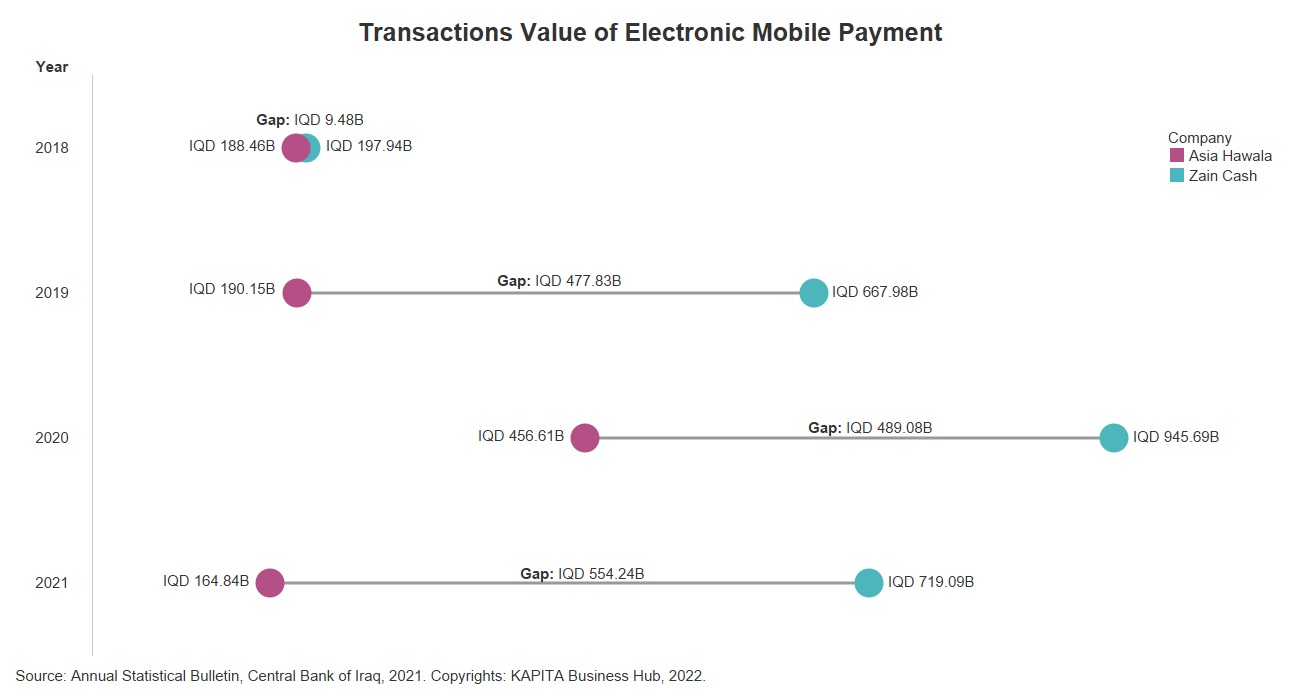 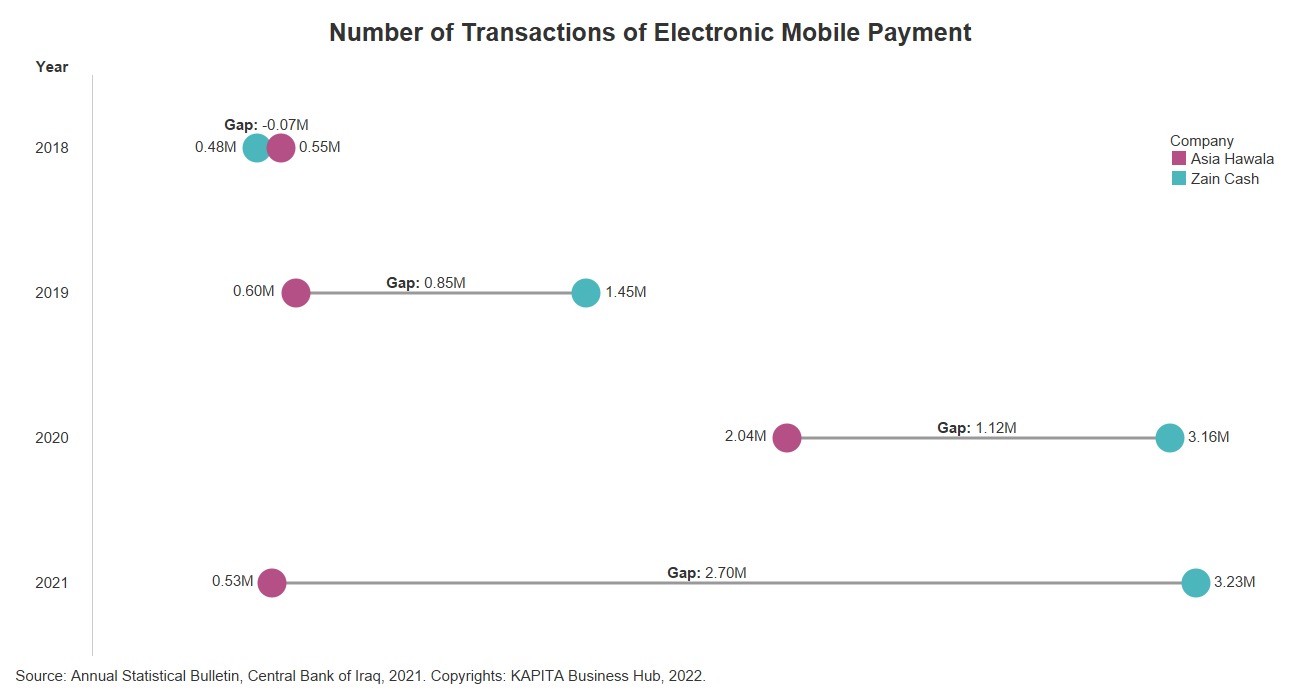 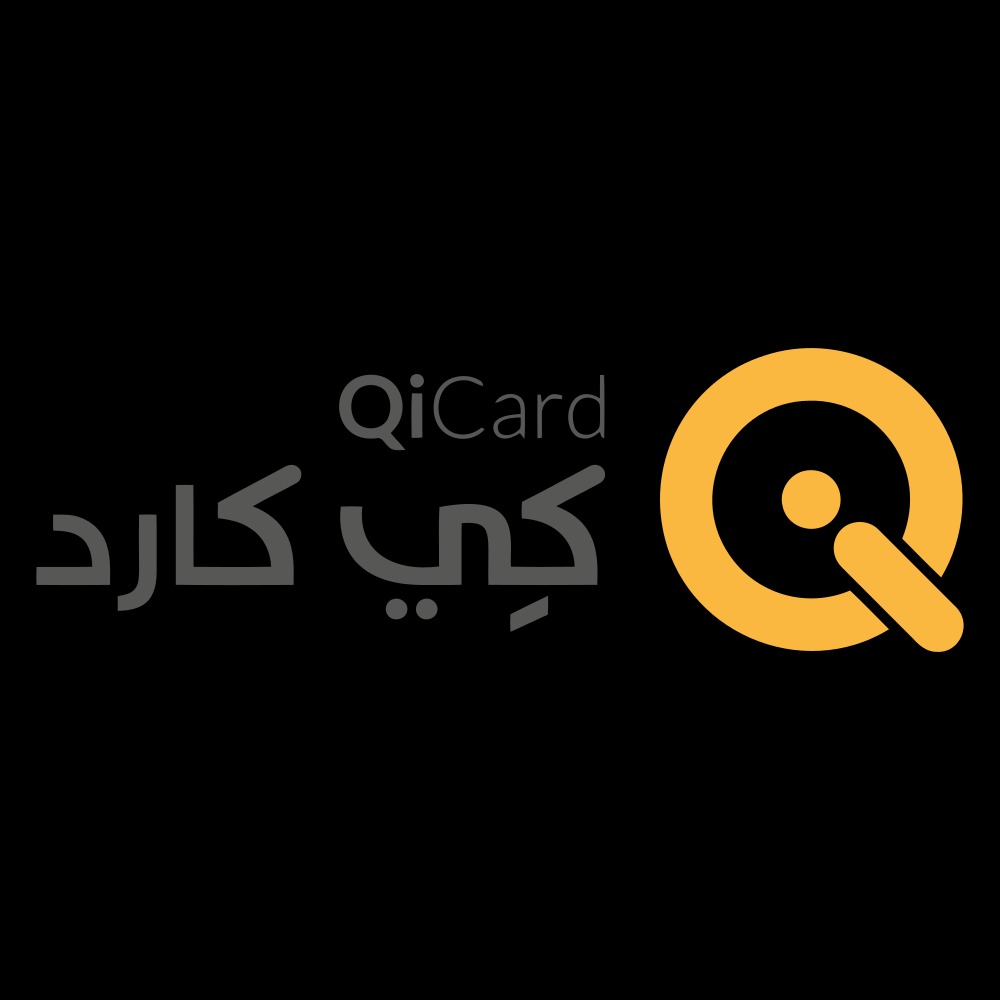 QiCard was founded in 2007 as a joint venture between Iraqi Electronic Payment Systems and Al-Rafidain Bank. QiCard has been distributing biometric identity cards to citizens and delivering electronic banking services in Iraq for over a decade. Prepaid cards issued by the corporation are among the most extensively used in the country, as they are one of the primary methods to receive pension payments from the government.

Arab Payment Services is a privately held Iraqi company specializing in electronic payment and banking services. It is the first corporation in Iraq to have a local division and database dedicated to ensuring the confidentiality of data and information. APS has a diverse product portfolio. Among these services are the issuance of MasterCards, the provision of POS equipment, and an e-payment gateway.

Blue, also known as Ishtar Gate, is a private shareholding company registered in Iraq in 2020. It is licensed to provide comprehensive services to enable Iraqi banks to implement all electronic payment projects, both technically and commercially.

NassPay, founded in 2015 in Erbil, is a provider of online and offline payment solutions. The company offers merchant clients dependable and secure payment solutions that enable them to extend their customer base across the country. It provides alternative financial options to Iraq's predominantly unbanked population, such as their multi-purpose MasterCard.

Iraq Electronic Gate for Financial Services Company (SWITCH) was established in 2016. SWITCH is registered in Iraq as a national company and is licensed by the Central Bank of Iraq (CBI), Mastercard International, Visa International, and MoneyGram. Their services include issuing cards, ATM and POS acquisition and management, and money transfers, among others.

Founded in 2018 and headquartered in Baghdad, Neo is part of INC, an Iraqi company registered in Iraq and holds a license to practice business in electronic payments from the CBI. The company provides virtual and physical prepaid VISA cards linked to their digital mobile application.

Fast Pay is an E-payment service provider that was established in Erbil in 2017. Through their mobile application, Fast Pay provides payment solutions for both personal and business usage. The service allows customers to deposit and withdraw money by visiting any of Fast Pay’s stores or agents. Other services include online shopping, internet recharge, and receiving money directly through their mobile wallet. 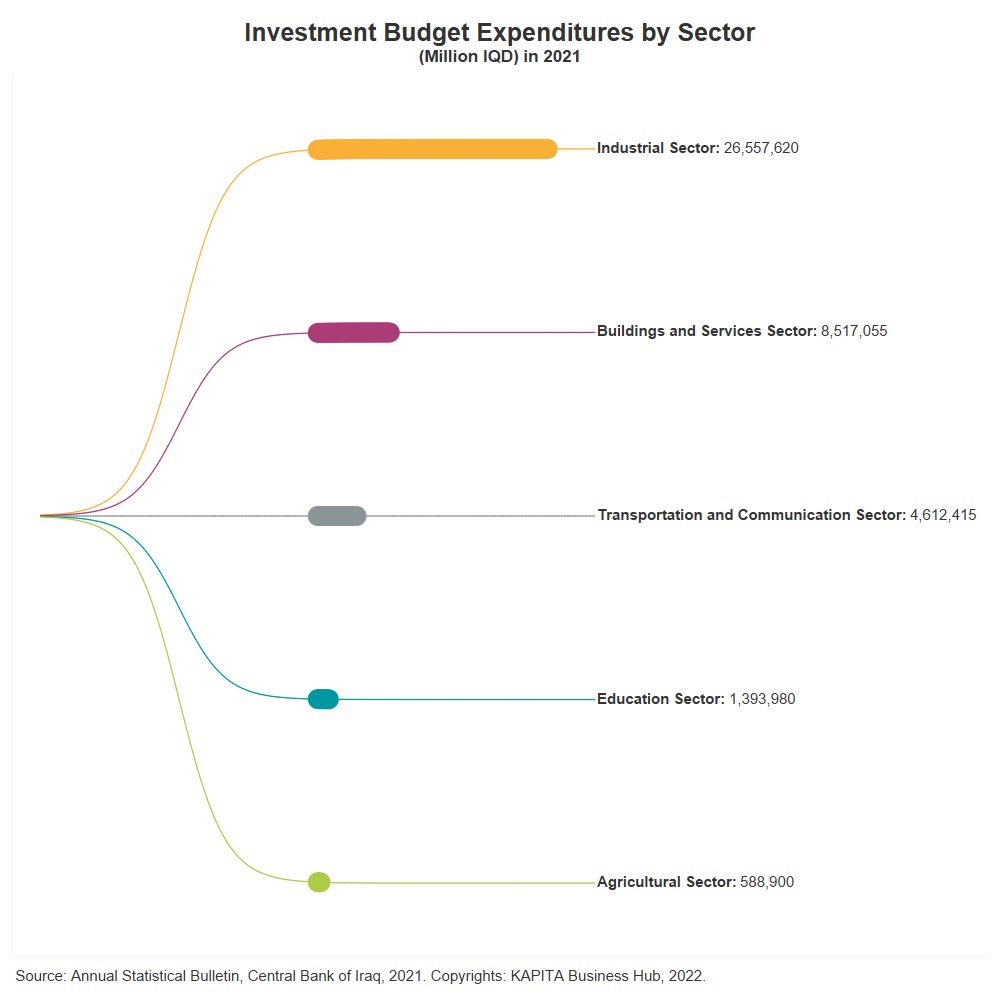 In 2021, CBI allocated around 42 trillion IQD towards the development of industrial, transportation, and a range of other sectors in an effort to tackle stagnation and encourage existing small projects.

However, it is also worth noting that the education and agricultural sectors received the least amount of the investment budget in comparison to other sectors, with approximately 1.394 trillion and 589 billion IQD, respectively.

With state-owned banks taking the lead in the sectoral investment scene, 2021 saw an increase of 11.4% in investment budgets from the previous year, which suffered financial ramifications brought forth by the COVID-19 epidemic. Additionally, Private shared and local banks’ investments skyrocketed in 2021, exhibiting an increase of around 183% and 77%, respectively, when compared to 2020. Private foreign banks investment, however, displayed a steep decline in 2021 of about 60% when compared to the previous year.

The increasing implementation and issuance of electronic payment, especially with the salary domiciliation initiative, is creating a tremendous imbalance. Since issued cards are seldom used in daily life owing to a lack of acceptability, there is pressure on salary withdrawals in cash, preventing the payroll cycle from continuing electronically. This is due to an insufficient number of automated teller machines (ATMs) and points of sale (POS); their numbers are not increasing at a rate sufficient to accommodate the shift to electronic payment. 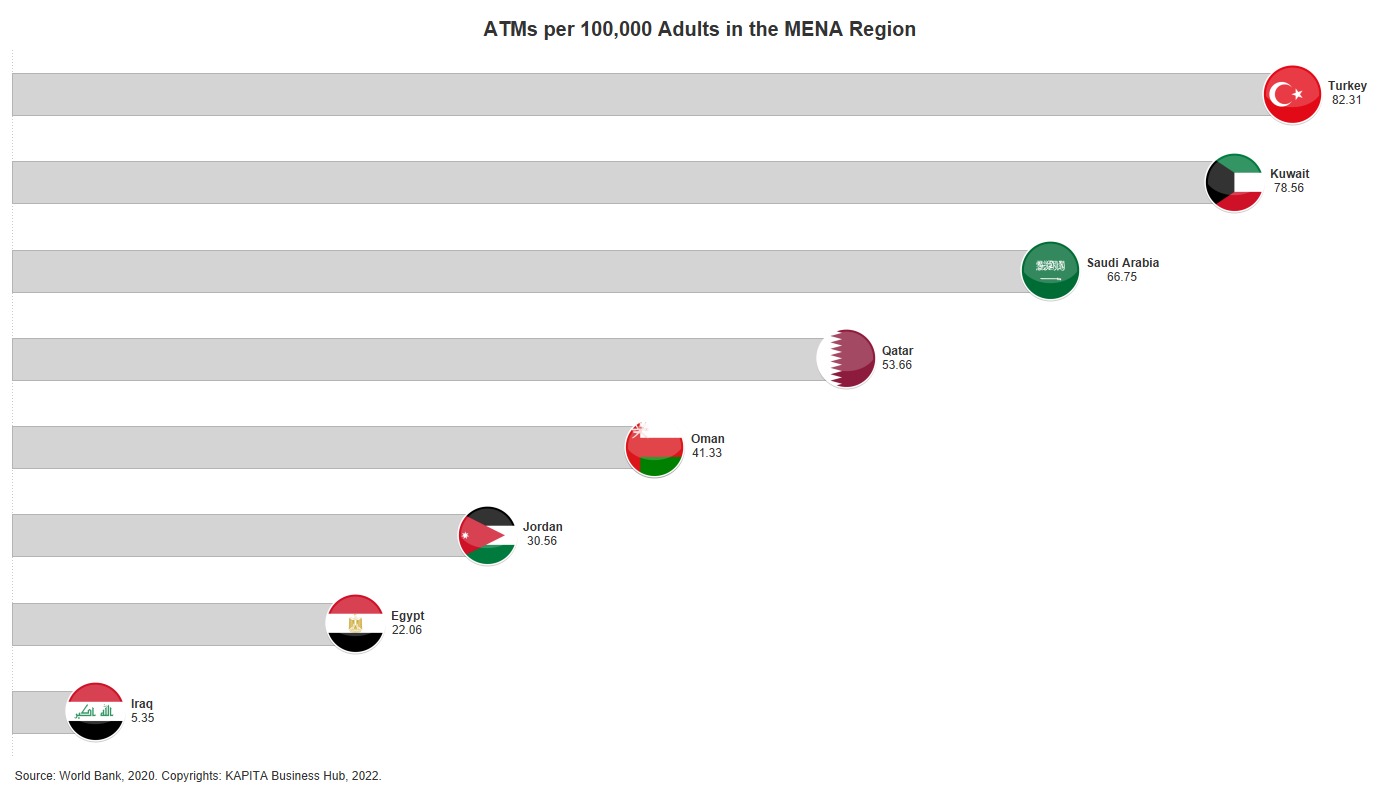 Cash's dominance in Iraq's economy hinders the growth of the banking system, as it is the primary store of value in the country. It is also the biggest instrument of economic exchange. The importance of cash is tied to the stability of the economy due to its usefulness during crises and the need to withdraw it to support spending.

Cash has this importance because of the state's reliance on oil revenue. The CBI manufactures new dinars by trading US dollar oil income. These Iraqi dinars are used to pay wages, pensions, products, and services. This issue continues to highlight the constrained role of the banking sector, especially in the formation of commercial bank money and as a means of economic exchange.

Iraqi people do not trust their banking institutions nor view them as a secure place to shelter their finances. There are many reasons for this, one of which is their lackluster profiles and limited services do not help them draw in entrepreneurs and businesses. Furthermore, high-interest rates, enormous collateral, demanding guarantee requirements, and low market penetration are also halting the sector's growth. Furthermore, due to the calamities that Iraqis have witnessed, the Iraqi individual has conceptualized that keeping their money in cash hidden safely in their homes is a guarantee of its security and availability in a time of crisis and need.

In a largely Muslim nation such as Iraq, many prefer to avoid entrusting their assets to conventional commercial banks due to their religious reservations. Hence, Islamic banks began to develop progressively. However, numerous challenges impede the functioning of Islamic banks in Iraq, including insufficient expertise, the absence of an Islamic financial market, inadequate legal protection, and the subjection of Islamic banks to the CBI in terms of the proportion of legal reserves, which hinder funds for investment, reduce project attraction, lower profitability, and favor commercial banks over Islamic banks in terms of competitiveness.