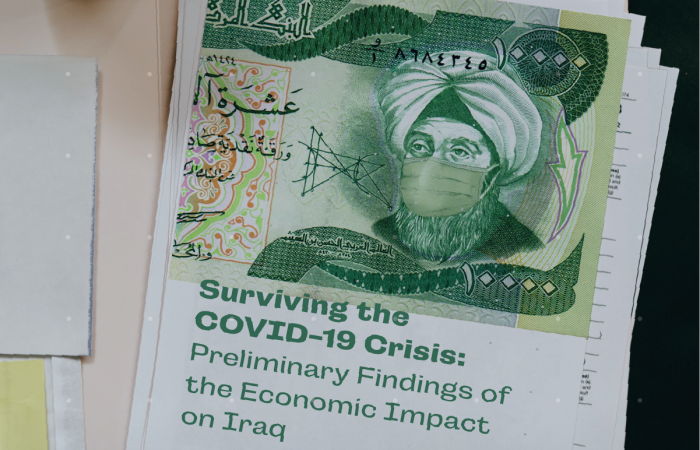 Our team studied the magnitude of the current economic crisis resulting from declining oil prices and the preventive measures taken against the virus. The research surveyed over 500 individual from various professional backgrounds including public and private sector employees and business owners. The research includes insights from experts from a range of fields such as finance, economy, construction and business development.

The study discusses attitudes towards the financial situation and the extent of the economic impact on different sectors such as Energy, Travel, E-commerce and Banking. 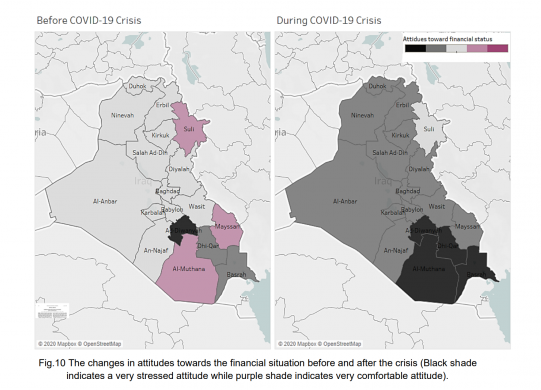 Here are key highlights from the study ‘Surviving the COVID-19 Crisis: Preliminary Findings of the Economic Impact on Iraq:

The COVID-19 pandemic is inflicting serious damage on the world’s economy. Unemployment rates are through the roof, oil prices have collapsed, businesses are shutting down and whole sectors are struggling to stay afloat. Iraq was not exempted from being hit by the world-scale crisis. A country that is heavily reliant on oil exports with poor infrastructure and a low level of preparedness for such a crisis, Iraq is facing a special set of challenges during these times. This research aims to evaluate the current situation in an attempt to quantify the magnitude of the crisis on various business sectors and individuals alike, which can be used in the formulation of a plan to emerge from the current crisis and stimulate economic recovery. 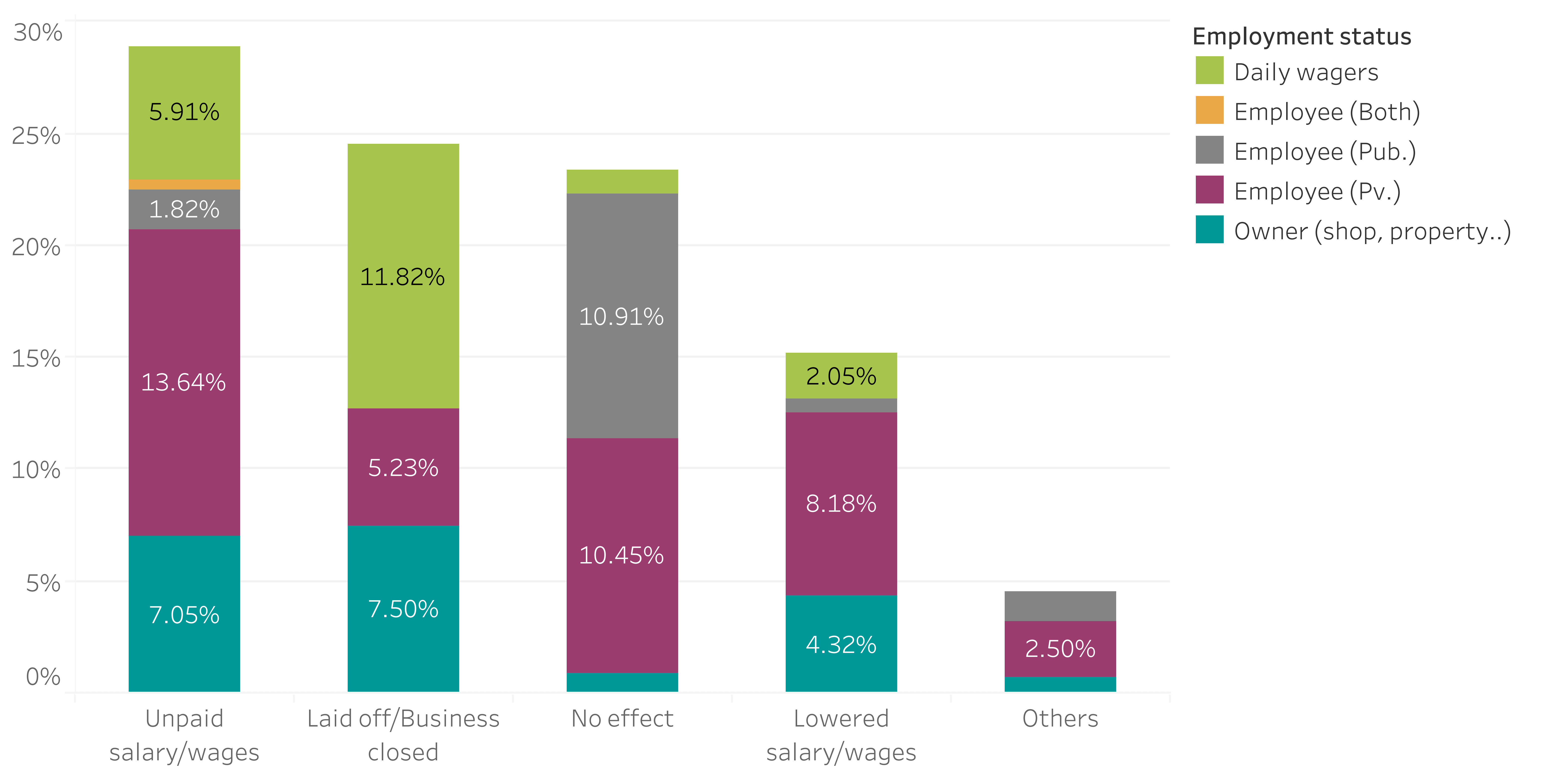 A combination of quantitative and qualitative methods was adopted to collect data. An online survey comprising 3 main sections (demographic information, employee/daily wage workers section and business shops/property owners’ section) was conducted to gain an insight on individual perspectives and semi-structured interviews were conducted with businesspeople and experts to consolidate the insights gained through the survey with recommendations on effectively passing the crisis. Convenience sampling was used for the online survey, while snowball sampling was used for interviews. Statistical Package for Social Sciences (SPSS) was used to analyze data from the survey, while  thematic qualitative analysis was conducted on the interviews after being transcribed to English. More than 680 individuals responded and interviews were conducted with 15 experts. The majority of respondents (more than 50%) were of the 20-30 age group and from Baghdad. Three-quarters of respondents were males and the rest were females. About 95% of respondents were literate with more than 50% of them holding a bachelor’s degree. Private sector employees formed the majority of respondents (33.5%), while unemployed individuals, business owners (shops/property) and daily wage workers had almost similar response rates (17%); public sector employees formed a relatively lower rate of responses (12.1%).

Insights and perspectives from the interviewed experts corroborated the findings of the survey. Most of the experts expressed that public sector employees are better standing financially and are less affected by the current crisis, while a heavier toll was inflicted on private sector employees, considering that the vast majority of private sector employees do not have social security and have no contracts signed with their employers. They also reported that many private sector employees were forced to take unpaid leaves or had their salaries completely cut off or discounted because businesses could fail if they paid salaries. However, employees of large corporations are still getting paid normally, while employees of small and medium businesses were impacted by this. Moreover, according to the interviewed experts, daily wage workers are likely to be the most affected during this crisis and unemployment rates are projected to increase due to layoffs, decreased revenues and business operations.

As to the impact on businesses according to their size, there were two opinions presented during the interviews. The first one is that large businesses are going to pass this crisis, but the small and medium ones are not due to their lack of resources and cash flow. The second opinion, however less prevalent, was the complete opposite stating that bigger corporations will sustain more damage because they are less able to adapt and modify their operations than smaller businesses.

As per the different sectors of businesses, they all have been affected to various extents. Iraq’s income relies massively on oil exports (forms 90% of Iraq’s government revenue) and oil prices are plummeting during this crisis. Hence, there will be a plethora of detrimental consequences on various sectors and on top of them is the energy sector. Also, the construction sector relies heavily on governmental investments, and since oil prices are falling, many construction projects have been put on hold.

Transportation and logistics were unquestionably severely hit as well due to the curfew. Whole business operations relying on transportation froze except for the transportation of food. The travel sector also took a harsh hit since countries are shutting borders and airline companies are cancelling flights by the thousands. Not to mention that the travel-suited season has passed which is crucial for travel agencies.

The curfew has left the e-commerce sector struggling. They could receive orders but not deliver them to customers. They were left with stock debts and fixed costs payments despite not generating revenue. Brick and mortar stores suffered a larger impact than e-commerce although groceries, pharmacies and bakeries were less affected because they were allowed to operate with fewer restrictions. However, after the lockdown, they have a great potential to scale-up their businesses because people’s behaviour is changing as they tend to avoid crowded places.

As for education, private schools were under financial stress. They were unable to pay their teachers’ salaries because, for many schools, tuition fees are paid on a monthly basis. Even

though private universities were relatively financially standing better due to the payment of the fees which usually takes place one or two times a year, they are facing multiple challenges and many are unable to pay their staff. Also, the increasing trend towards e-education surfaced more challenges arising from staff unpreparedness and the internet. Although the internet service capacity was increased by 25% to relieve some of the burden on internet service providers, maintenance and operation were difficult during the curfew.

The banking sector has experienced problems on multiple levels. Most private banks clients are contractors working with the government, and since the government is in debt to those contractors, the activities of private banks have been limited. Moreover, the liquidity in banks is at a minimum because of the reserve requirement in the CBI and the fact that people usually open current accounts, and therefore decreasing the banks’ ability to invest. In conclusion, the COVID19 crisis has adversely affected businesses and individuals alike and a robust plan needs to be devised in order to outlast this period.

KAPITA's research team deeply thanks and appreciates its partners who majorly contributed to the completion of this study. We sincerely thank Deutsche Gesellschaft für Internationale Zusammenarbeit (GIZ) for being an outstanding enabler for us, Iraqi Innovation Alliance (IIA) for their contribution in data collection and Iraq Business News (IBN) for being our media partner.

We would like to thank all the people who filled out the survey and contributed to the shaping of this study to highlight the impact of the COVID-19 crisis on Iraq's economy.

KAPITA's research team would like to express its deep gratitude to the interviewees for their help in making this research possible (The following order is the order of the interviews):