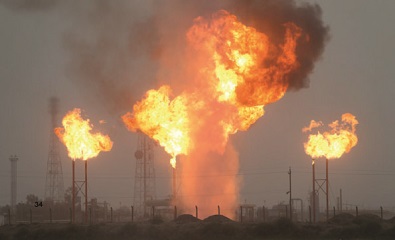 A Glimpse into the Iraqi Hydrocarbon Sector

Iraq’s hydrocarbon sector is a major player on the world stage and has navigated relatively well during an extremely turbulent period, which included the war against ISIS, two periods of the oil price collapse, and the COVID-19 pandemic. It has managed to nearly double its output and become one of the largest producers in the world. However, much more could have been done and many opportunities have been squandered due to many factors including mismanagement, bureaucracy, and lack of a coherent strategy. Iraq needs to develop this sector, especially since oil and gas accounts for almost 60% of the country’s GDP, 99% of export earnings, and 90% of government revenues, making the Iraqi economy one of the most oil-dependent in the world. The relationship between hydrocarbon revenues and the national budget is crucial. Government expenditure has closely tracked movements in oil prices, rising when the oil price is high and falling when the prices are low.

The Technical Service Contracts (TSCs) launched by Hussain Al-Shahrastani were successful in bringing investment into the country and increasing production. However, there were many issues and before delving into these issues, it is worth providing a brief overview of the type of petroleum contracts available.

It is important to understand that countries operate within a competitive world market for oil and gas investment. Therefore, fiscal terms have to attract investors. International oil companies have a choice of which countries to bid in, thus countries are competing among themselves.

At a time of relatively lower oil prices and constrained budgets, companies might be less aggressive in bidding and have to be more selective about investing in particular countries.

Another major issue that adversely impacted Iraq was the fact that cost recovery was guaranteed, no matter what the costs were. There were absolutely no incentives for the operating companies to keep their costs to a minimum. The only way for costs to be kept low was for effective oversight by the Ministry and the National Oil Company, who initially were not capable to properly monitor those companies as they lacked adequate training in these new functions which they had to carry out.

Suddenly, overnight, the Iraqi staff had to oversee the work of major international oil companies such as BP, Shell, and Exxon who have a wealth of expertise and experience, bringing in their armies of expats.

It was a complete mismatch and Iraq struggled with this in the first few years of operations. If the contract structure incentivized joint working and partnership and made it worthwhile for the operator to train and develop the Iraqi staff, then this issue would have been resolved. Unfortunately, this was not the case.

The other issue with the TSCs was the fact that cost recovery was not linked to the oil price, which might not be a problem when oil prices are high, especially in days when it was worth $120 per barrel. However, when the oil price collapsed in 2014, this became extremely insufferable for Iraq. The government could not afford to compensate the companies and had to renegotiate the production plans and place projects on hold to muddle through this difficult period.

The TSCs, by their nature, create an adversarial relationship between the Ministry and the National Oil Company, and the international companies operating in Iraq. It is an owner-contractor relationship, further complicated by the cultural and language barriers and the difficulty of operating in Iraq, which hinders a lot of progress. All those issues accumulated and resulted in several international companies walking away from their investments. For example, Shell sold off its operating interest in mid-June and its 20% stake of West-Qurna 1.

To remedy the problems of the TSCs, Iraq has proposed a new contract model as part of its 5th bidding round which was held in April 2018. The contract model was a significant improvement of the TSCs, which created a link between the oil price and the cost recovery. Essentially, this means that when oil prices are high, the company can recover more of their costs and when oil prices are low, the company recovers less of their costs.

In addition, the new contract model incentivized the operator to keep their costs as low as possible by linking their profit to their cost. In other words, if their costs are low, the profit margin increases, and vice versa.

Furthermore, the contract structure was less adversarial and encouraged partnerships, in which both the companies and the country are aligned and working towards increasing production while also keeping costs low.

In the 5th licensing round, 11 blocks were offered, the majority of them being border fields and non-associated gas fields. Several of the fields were in economically deprived areas, such as Diyala, and in desperate need of development. Several international companies participated in the bid round and 6 blocks were awarded. However, two and a half years later, the Iraqi government has still not signed the contracts and the resources remain undeveloped, which is inexplicable. Signing the contracts and allowing the work to progress will bring much needed economic development and employment opportunities as well as utilizing the hydrocarbon resources, especially the gas in Khashm Al Ahmar field. Therefore, reducing the need to import expensive Iranian gas for power generation. Furthermore, developing the border area fields secures Iraq’s territorial integrity and ensures that no hydrocarbons are lost to neighbouring countries. For example, the Huwaiza field neighbours Iranʼs Paydar West oilfield, Naft Khana field borders the field of the same name in Iran.

Another lamentable issue has been that of gas. Iraq’s gas resources are abundant, both as associated gas and non-associated gas. Rising oil production meant an increase in gas flaring to reach approximately 16 billion cubic meters per year. Some of this gas is captured and utilized. However, Iraq’s efforts need to be accelerated, particularly when considering the growing need for gas in energy generation and the costly reliance on imported Iranian gas.

Gas has been traditionally a waste product in Iraq. Therefore, it is not a priority in terms of utilization. It is much less lucrative per unit of output than oil, and it is also more difficult to transport and its use requires a complex process of coordination along the value chain. In Iraq, the most common problem is that there is no infrastructure in place to allow for the productive use of the gas, hence the persistence of flaring. But there are also examples of the reverse case, where a gas-fired power plant has been built and ready to operate but no gas was available to operate it. This was the case in Mansuriyah, where a power plant has been built and was supposed to receive gas from the Mansuriyah gas field. However, this field has not been developed, instead, the power plant runs currently on expensive imported Iranian gas. Even more sadly, the Khashm Al Ahmar gas field, which is close to Mansuriyah power plant and can send gas to the powerplant, was awarded in the 5th licensing round in 2018. However, the Iraqi government has not yet signed the contract.

Iraq has some major non-associated gas fields, including Mansuriya, Akkas, Siba, and Khashm Al Ahmar. Only the Siba field has started commercial production in 2018. It is essential for Iraq to begin utilizing the gas resources as the short-term incentives for Iraq to develop a better functioning gas market are strong. Iraq continues to suffer power shortages while importing gas from Iran is expensive and difficult to justify given the wealth of Iraq’s gas resources. In the long term, gas can underpin an industrial strategy creating ‘gas cities’ and industrial zones and therefore an important conduit to economic diversification and employment. It will also have positive environmental impacts as gas flaring practice is reduced.

The oil and gas sector is the building block for Iraq to create a more diversified economy. It needs to immediately expedite the development of projects that can deliver water to the oil fields, implement gas flaring reduction projects as well as developing the non-associated gas fields. Iraq is not able to do this on its own and will require the assistance of neighbouring countries as well as international oil and gas companies. Iraq needs to improve the investment framework to attract international investors and reduce the bureaucracy in order to create an attractive environment for companies to do business in Iraq.

Delaying implementation of the projects is to the detriment of Iraq. The world is moving away from hydrocarbons to renewables at breakneck speed. In the UK, the government has legislated net-zero emissions by 2050 and will ban the sale of new petrol and diesel cars by 2030, switching to electric vehicles. Many of the European countries are following this example, even China declared a net-zero emissions target by 2060. This means that the oil demand will be significantly reduced in the future. Therefore, Iraq has to create a balance between restraining production now while ensuring to make the best use of its resources and is not left with oil in the ground which could have been produced economically at an earlier date. Iraq has one of the worldʼs highest reserves-to-production ratios ‒ i.e. it is producing its reserves very slowly and will require 94 years to produce most of its reserves.  This is risky as it is not clear whether the world will still require large amounts of oil in the next 94 years.