ScaleUp Academy’s 2nd Cohort finally graduates its 9 accelerators after 6 months of training. On a beautiful afternoon, the graduation ceremony took place in KAPITA’s headquarters in Al-Mansour.

KAPITA hosted a number of figures who represented partners and supporters for KAPITA’s programs and the Iraqi entrepreneurial landscape.

During the event, speakers took turns expressing their pride in the graduated startups as well as their hopes for the future. Then each startup was given the stage to introduce itself and its achievements.

Starting the event with a welcoming word by KAPITA’s founder, Mujahed Al-Waisi. As he expressed his gratitude for the German, Dutch, Canadian and Finish Embassies as well as Asiacell for attending the event.Mr. Mujahed also introduced KAPITA and its work in the private sector development field and left the stage for his excellency, the Deputy Ambassador of the German Embassy, Peter Felten Charge D’affaires. 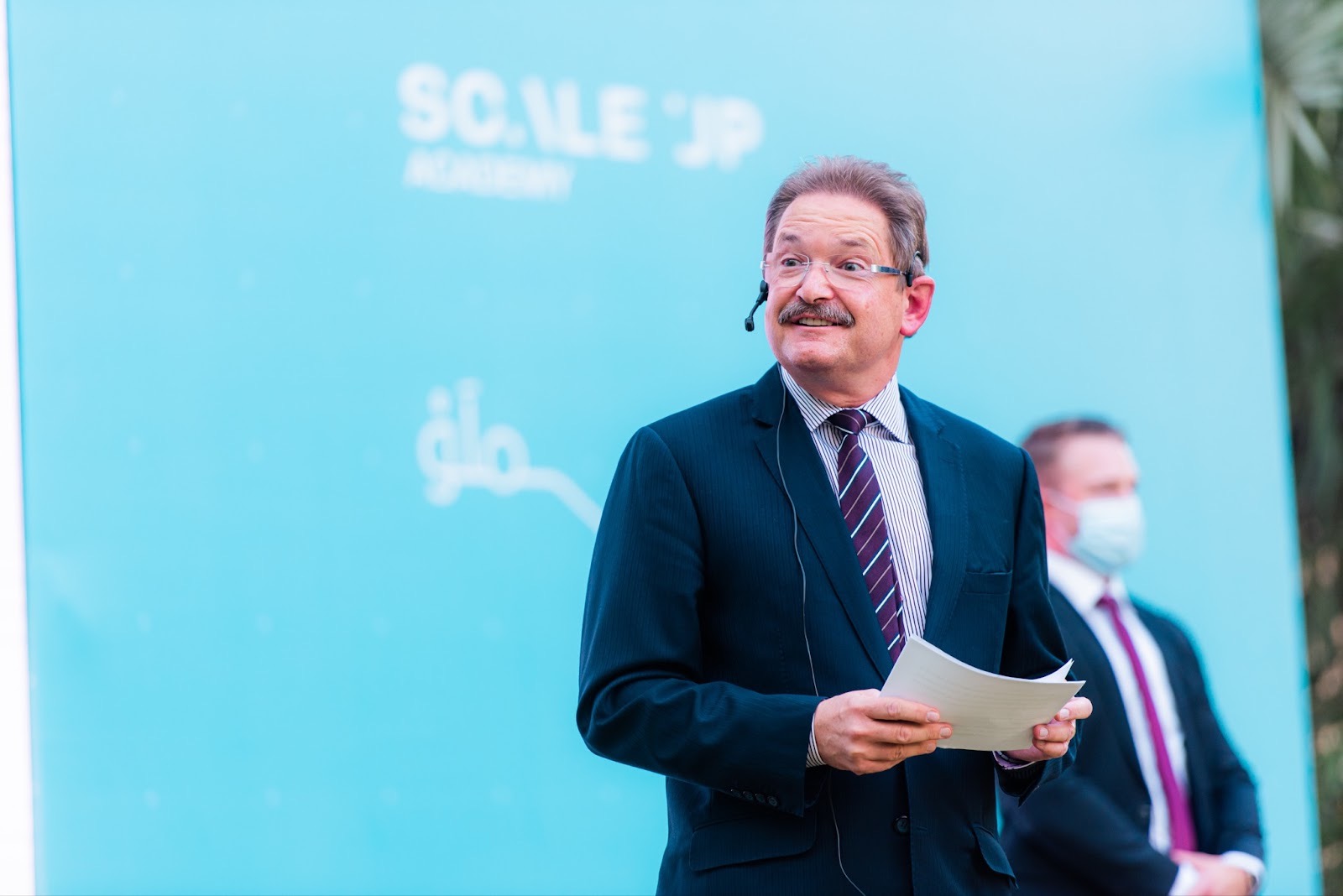 His honor started his word by mentioning how “the only constant in life is change”. He talked about how the past year and a half has had a big effect on the economy of every country especially Iraq which led to many changes.

His excellency explains: “The future does not lie in depending on the fluctuation of price in the market on one product like oil and it does not lie in the waste of resources nor in the phenomenon of corruption.

We believe that Iraq’s future lies in the virginity of Iraq’s young population with their talents and creativity to contribute to the prosperity of this nation.”

“The conditions in Iraq seem to provide a promising ground for startups with the dominant state sector and private sectors strongly oriented towards the oil industry. Startups have a lot of room to develop and contribute to the private sector. There is huge demand for technical solutions, health, and tourism. “ His words truly were of great importance.

Next, his excellency, Rochus Pronk Chargé D’Affairs (Deputy Ambassador) from the Dutch Embassy presented his speech to the audience.

He shared with the graduates: “The covid pushed us to our limits but it gave us resilience. It has shown the Iraqi youth are driven and resourceful and you give us hope.”

Also, “Scaleup programs aren’t easy anywhere but doing it in Iraq during this immensely challenging time and providing us much quality is a true accomplishment”

The Dutch Embassy has been a big supporter and a partner with KAPITA in supporting the incubation program Orange Corners Baghdad.

The ceremony followed with a word by Mr. Niall Ardill - Advisor on Startup Entrepreneurship for the Information and Communications Technology (ICT) for Youth project, on behalf of GIZ.

Mr. Adrill explained: “ScaleUp Academy is supported by ICT program  perspectives for Modern Youth in Iraq, which is commissioned by the German Federal Ministry of Economic Cooperation and implemented by GIZ of iraq. Its goal is to improve employment prospects in the digital economy and digital sector in iraq.

He added: “GIZ and the ICT are honoured to contribute to the establishment of ScaleUp Academy and we are proud to support the development of entrepreneurs that are graduating from this program.

And he ended his speech by congratulating the graduates of the academy, wishing them success.

After that, Mr. Omar Faleh, Director of Communications and Public Relations at Asiacell spoke on behalf of Asiacell in his speech:”I also wish to congratulate Kapita for creating and managing this great academy that we have had the honour to support and sponsor. Today we see the fruit of this support.” And he added: “Asiacell promises to continue in its ongoing mission to help you with all its available resources and technologies to keep helping you grow. We will continue to spark the change you need to allow your businesses and innovations a good ecosystem to flourish in.” He ended his speech by congratulating the graduates, wishing them success.

The last word at the graduation ceremony was for Mr. Mohammad Jamal as he picked up the speech after Mr. Mujahed about KAPITA’s journey. He said; “ At the early days of planning for KAPITA, we believed that the development of the private sector is a must for a better future of Iraq and it is only possible by the development of capita, the latin word for person and the origin of the financial word capital. So at KAPITA, as our slogan says, We invest. We invest better by developing people and providing business with access to capital. 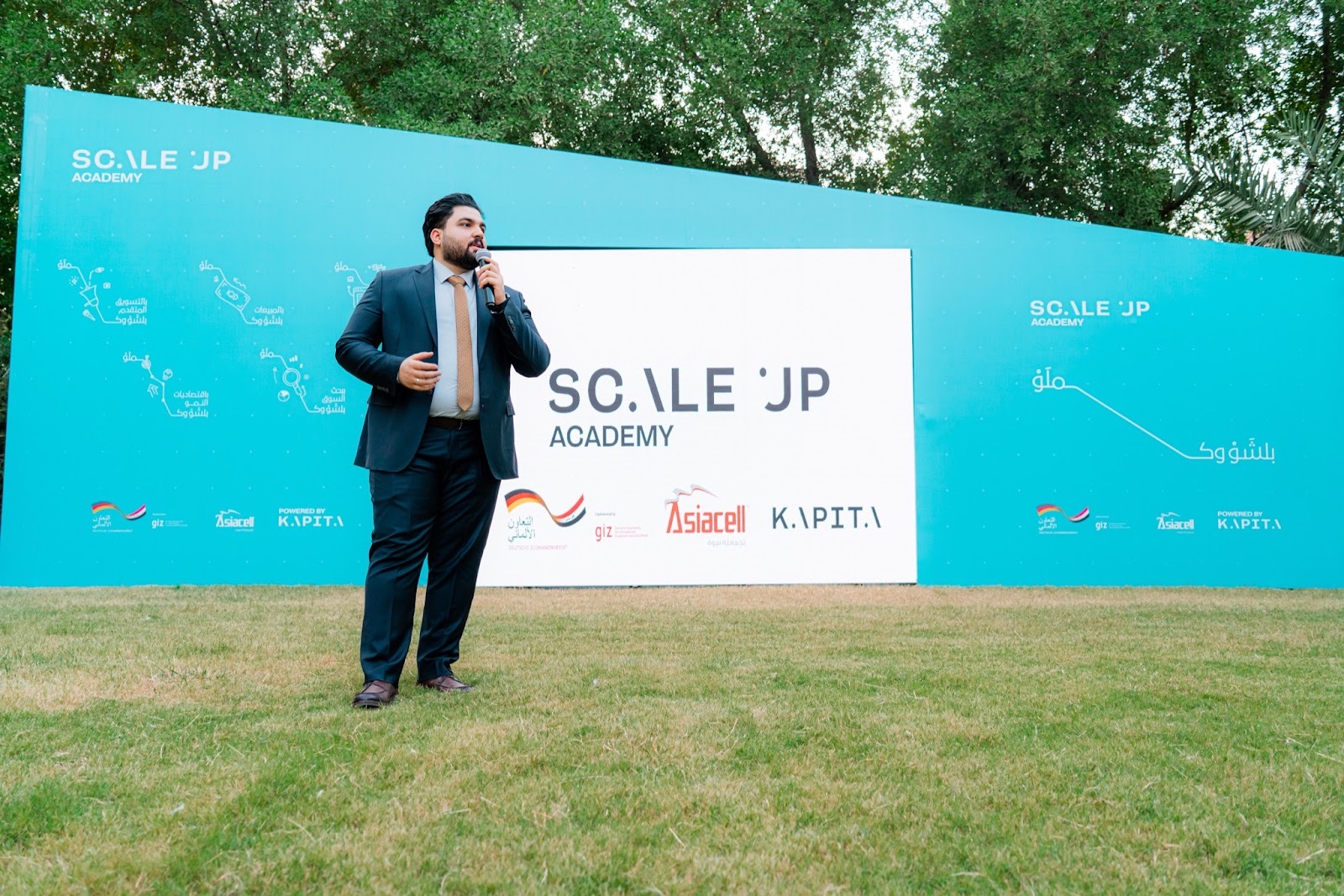 Our approach for this development is to create and support a pipeline of startups and SMEs development. From supporting early stage startups to accelerating well established businesses and providing them with investment to be the market leaders.

This approach would have never seen light without the great and generous support of our funders and partners. GIZ has been an exceptional enabler for most of our plans, by their support to our Scaleup Academy, Iraqi Angel Investors Network, and Business LANDSCAPE magazine.

Asiacell supported us tremendously by supporting our startups at Scaleup Academy. Also, we are honored to have the Dutch embassy today who by their support we established the incubation program for early stage startups and GE who together started Takaat program to support microbusiness.”

ScaleUp’ Academy Training Program, aims to graduate investment-ready scaleups. Therefore, we admit founders and key team members in an intensive 9 weeks program where they’ll receive general business and tailor-made sessions to escalate the growth of their businesses in no time. Also the entrepreneurs will work closely with business development experts to develop their business growth strategy and to recognize market opportunities.

After completion of the Academy, each startup will receive “post-graduation services (Marketing Services)”. These services will run for eight weeks and are needed to scale the marketing capacity of the startups in the fields of Branding, Marketing Strategy, Digital Marketing and/or Advertising.

This program is supported by GIZ and Asiacell.